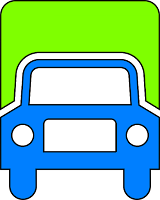 Effectual logic is people-dependent and causal logic is effect-dependent.
That, in a nutshell, describes effectual thinking for me.  I found it interesting to read Sara Sarasvathy's views on decision making:

In education, there seems to be a gap between what we teach students about being entrepreneurs and how entrepreneurs actually behave.  In most instances, we use a causal approach for students...have a goal in sight and then collect all of the resources necessary to work toward that goal.  This is based on preconceived notions, and all of    (Image: https://pixabay.com/en/truck-lorry-transportation-293979/)
the resources collected are determined by the aspects of the goal as envisioned.  Effectual thinking looks more at what students already have and what they know about themselves in order to guide them to thinking of possibilities.  This is a very iterative approach to decision making, and it is very difficult for many of us who have forever found ourselves trying to prepare for a goal in the future...we feel safer that way...we know where we are going...but do we really?
Effectual thinking, as one entrepreneur in Sarasvathy's writings put it, is like selling a product before it is actually built.  In this new era of entrepreneurship, this type of thinking seems to focus on a more random approach to solving a problem and depends heavily on creating networks around the entrepreneur that end up giving direction...possibly in a different way than originally thought.  It is highly dependent on a more empathetic approach to problem solving, and it considers "affordable loss" or using minimal resources to develop something to market.  The "sell before you make" reminded me once again of the story of Jim Poss who sold solar-powered trash bins even before production just by appealing to the needs of those he thought might need it most.

Instead of traditional market research that we usually emphasize with students, the marketing research would be more of a hands-on approach to development.  Also, getting buy in early would eliminate some of the uncertainty of going further with an idea.

The founder of U-Haul developed the company from basically nothing.  Even with limited resources, the founder was able to gradually build from within, taking successes and pitfalls along the way as clues for further direction and building.

In my own world, I have been looking at entrepreneurship as a causal form of creation:  create a product that I would want and see if others like it...with an effectual approach, I could use the people around me to help me develop my ideas and dreams.  I always thought I had to have capital ready to go if I ever wanted to create something...now I know that entrepreneurial thinking does not really follow that pattern.  I need to work on my network and listen to those around me!
at July 14, 2017