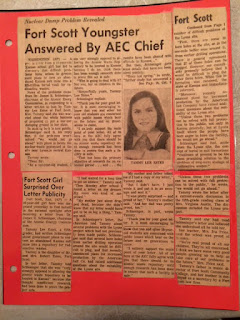 Authentic learning became a part of my life very early...in 5th grade as a matter of fact.  My teacher, Ms. Austin, decided that we should write a letter to an official in order to try to bring attention to a problem in our community.  I don't even remember how we chose our targets.  Perhaps we were given the latest edition of the Weekly Reader to ponder issues around us.  Or, maybe Ms. Austin gave us a list of choices. The year was 1972.  Whatever the plan, I came across a story reporting that the Atomic Energy Commission was considering putting a nuclear waste site in Lyons, KS.

Even though Lyons was almost 4 hours away from Fort Scott, I knew that depositing nuclear waste there would most certainly affect the lives of myself and my schoolmates.  I chose to write a letter to James Schlesinger, then head of the Atomic Energy Commission, pleading with him to rethink the unthinkable.  Just as every other classmate did, I mailed the hand-written letter and considered it "handing in" just another 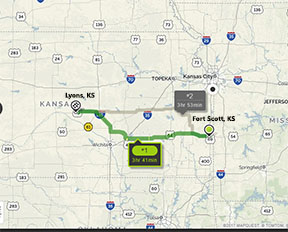 assignment.  Soon, however, I was to be surprised of the impact this letter would have on my life. 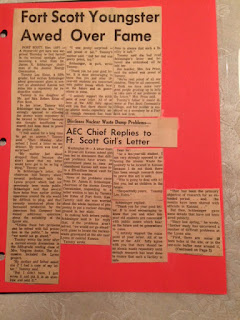 It began with a call to the elementary school office.  Winfield Scott Elementary didn't regularly get calls from Washington, D.C., so when the secretary handed me the phone receiver, she had a rather far away look on her face.  The voice on the other end introduced himself as someone from Schlesinger's office who was calling on his behalf concerning my letter.  Was this a bad thing?  Had I broken some rule?  My face must have turned white because the secretary began to reach for the phone...probably thinking that a fainting spell could occur at any moment.  The person told me that my letter made it to Schlesinger, and he would be writing me back.  But that was just the beginning.  Immediately, reporters began calling my home, asking for interviews.  Relatives from far away were sending us AP Photo clippings (I sure wish I hadn't worn the barrette that day) from newspapers across the country.  Immediately, I saw the impact of a small gesture.  I saw the way authentic learning makes a difference.  That experience changed me, and thanks to Ms. Austin, I now, as a teacher, strive for that authenticity and work to get my students to reach beyond the classroom walls.  I felt like I had made a difference, and I now know what needs to be done to start doing just that.  Thank you, Ms. Austin for being way ahead of your time in personalizing learning and providing problem-solving, authentic experiences for your students.
at October 16, 2017